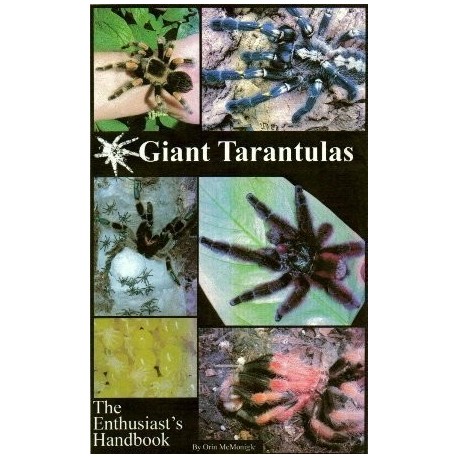 This handbook is for the advanced beginner who wants to learn about basic terminology from prosoma to opisthosoma, different types of incubator construction, standard basic breeding methods, and other items beyond the pretty spider in a box, and yet not be drowned in a sea of text so vast the eyelids must be propped open with a small stick. Species accounts for over seventy different tarantulas adress specifics such as the male apophysis, range, egg counts where available, common behavior, etc. but does not pretend that each and every species is kept in an entirely different manner or that repeating arbitrary humidity percentages and temps conveys usable data.

The text begins by covering basic tarantula anatomy from epigastric furrow to tibial apophysis. Next, practical captive mating procedures followed by eggsac care including rotating and standard incubators are covered. S'ling care, enclosures, and prey items follow. The bulk is photos and details for more than seventy species including range data, male apophysis type if present, aggression, behavior (arboreal, terrestrial, burrowing), average eggsac counts and other details where available. This was originally intended, in part, to provide color photos of the various species with related details so someone at a show, pet shop, or convention could look up the little s'ling they'd be buying to see what they might be in for. It fit nicely in a large pocket and I knew a few guys who used it as a wish list they brought to shows. It was nice to see one wrinkled and worn on the corners in the shape of a pocket and brought to life like a velveteen rabbit. Who knew everyone could just look up any s'ling on their phone not many years later.

From the Inside Flap

The S.I. logo is located on the inside flap. The setup was a collaboration of ideas by myself and Kelly Swift. Kelly is owner of the oldest (and among the most respected) captive breeding establishments for tarantulas in North America, Swift Invertebrates. Kelly is also one of the most respected breeders of tarantulas and most successful in terms of species produced and documented. We had discussed putting together a stylized tarantula book for breeders and collectors as far back as 1994 but there was never enough time. I finally, with Kelly's help and input, developed our ideas resulting in this guide.